Taking a Look Around My Desk 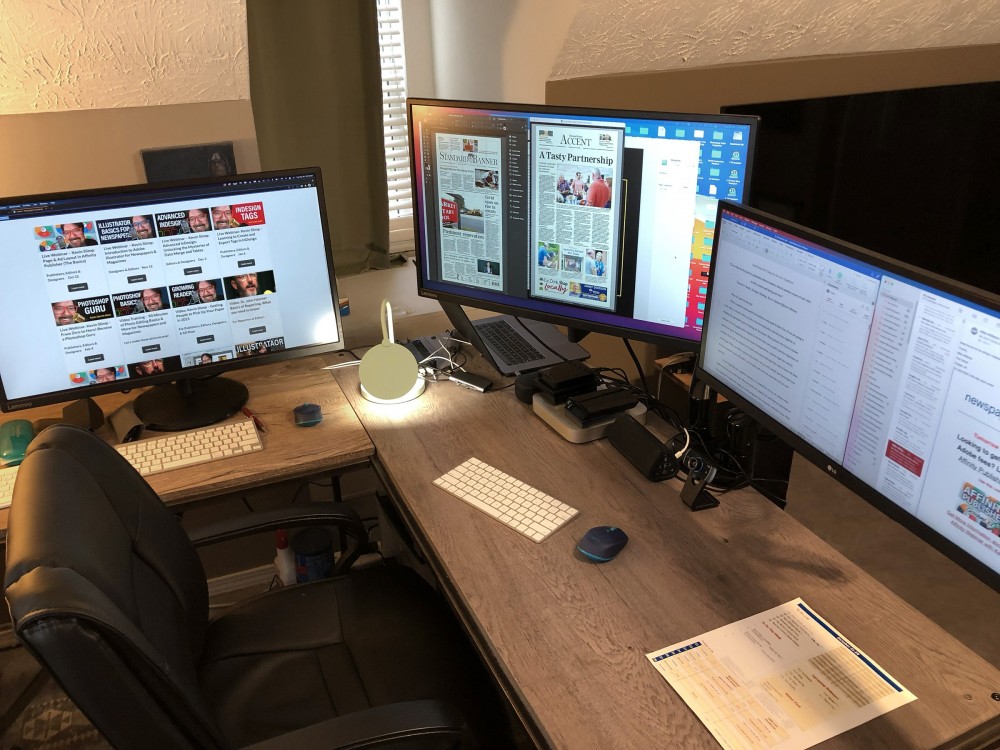 Today, I’m going to invite you into my office to see how I work and some of the tools I use. Many folks reading this column have been to my webinars and seen the printers, lights, and wall decorations behind me. Today, we will reverse the lens and see what I see when I’m sitting in front of the camera.

We live in a deadline-driven world, and time is crucial. A few minutes saved while working on a project might mean the difference between profit and loss. Whether I’m redesigning a newspaper, creating a book cover, or editing a manuscript, you can bet I’m going to find the fastest way to get the job done without any loss in quality.

If you were sitting in my chair, you’d see three very large monitors. Two are directly in front of me. The other is on my left. Until three or four years ago, I was a “one monitor guy.” That was before I met four young men who started a company just down the hallway from my office.

In two years, their little business had grown into one of the largest businesses in the self-storage industry, with offices all over the world. The first time I walked into their office – yes, they still shared one large office – I saw each of them, standing in front of three large monitors. They were writing software code, overseeing sales, and doing all the other tasks involved in owning a business like theirs. I asked them about their monitors, and they explained they didn’t have time to switch between applications. Everything they needed on their computers was always in front of them.

When the pandemic began, I moved everything home. I soon learned I could get more done at home than at the office. So, while there is usually someone at our company office, I rarely stop by there. I purchased hydraulic monitor arms for my desk, allowing me to move the monitors higher, lower, or side-to-side with the touch of a finger. I bought a much wider desk, allowing me plenty of room to work and space for the computers, monitors, drives, etc.

On my desk are two computers. One is a new Mac Mini, upgraded with the maximum amount of memory and hard drive. The other is a Macbook Pro, which I use when I go out to speak. I like to keep everything on both computers, so there aren’t any surprises when I’m in front of an audience. The Macbook is connected to the 32-inch monitor on my left. I often have a movie, tv-show or ballgame running on that monitor while I work. The necessity for background noise results from working a lot of hours, often until 2 or 3 a.m.

On top of the Mac Mini, you will find five backup drives. Yes, you read that correctly. I have five backup drives connected to my main computer. Having multiple backups has saved me more times than I can remember. At the cost of $80-$150 each, I’d be foolish not to have them.

In addition, my computers are connected to Backblaze, which creates a continuous backup of all my files “in the cloud.”

Besides backup drives and cloud backups, we use an online service called box.com, which holds essential files on a server. It allows everyone to work together from home as if we’re in the same building. It’s not cheap, but it’s well worth it for the type of work we do. We also have several dropbox accounts. We’ve learned there are times when box.com works better (when we want to allow outsiders to gain access to our workflow) and times when dropbox works better (keeping huge files available online).

You will also find a Nexigo webcam on my desk. It has much higher video and audio quality than cameras built into computers. That’s what you’re seeing and hearing when you attend one of my webinars. I created a camera stand out of three round peanut containers glued together, which I keep on the floor and use when leading a session online.

All my keyboards (there are three of them) are Apple keyboards. Even if I were working on a PC, I’d use an Apple keyboard. They are much more responsive than other keyboards, which leads to fewer errors. Yes, they’re more expensive.

There you have it. That’s pretty much everything on my desk. Throw in a few coasters, a couple of pairs of glasses (yes, I learned I work better with special computer glasses), and a light, and you know what’s on the other side of my camera.

How much has my output increased since getting a bigger desk, larger monitors, and newer computers? I’d guess I’m getting more than twice the work done than I was a couple of years ago, definitely worth the investment.