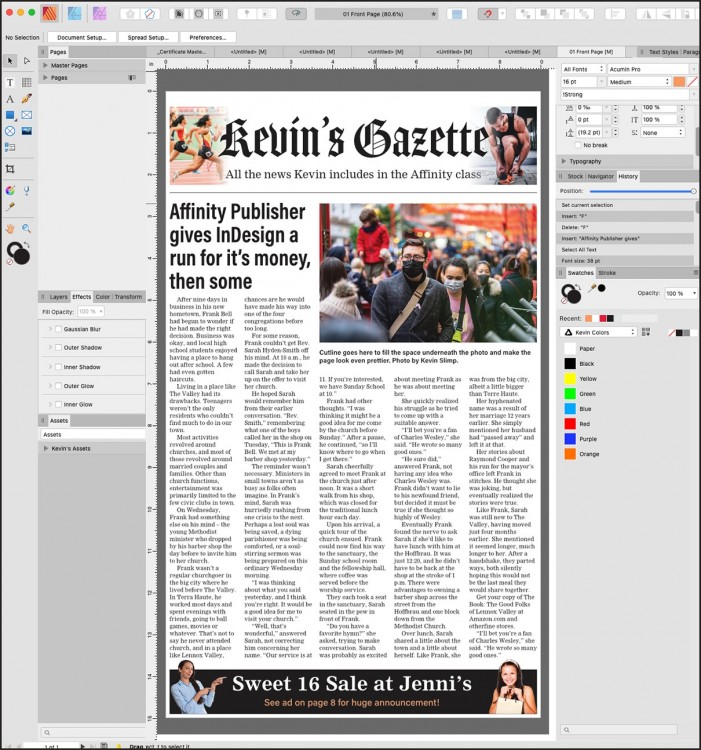 It’s been a while since a column has drawn as much response as my November review of Affinity Publisher, the layout application that has so many designers, editors and publishers talking. As a reminder, Affinity Publisher is an application with many of the same features as Adobe InDesign or QuarkXpress, but without the monthly subscription fee.

Following that November column, I was inundated with emails from publishers throughout the U.S., Canada and Asia to learn more about the new application. In response, I held two webinars, attended by more than 100 newspapers, which presented an overview of Affinity Publisher, as well as information about Affinity Photo – an app very similar to Adobe Photoshop – and Affinity Designer, which has a lot in common with Adobe Illustrator.

Following those webinars, I heard back from several publishers and designers who took my advice and ordered the $50 Affinity Publisher application and took it for a test drive. My advice was simple: Don’t jump off the InDesign or Quark ship right away. Spend $50 (which quickly became $25 when Affinity offered a discount on its applications that, as of this writing, is still available).

So far, all reviews are positive. Taking my advice, no one reported leaving their current applications yet, but all seemed very enthusiastic about what they’ve seen in the Affinity products.

There was good reason to wait. Affinity has been working on a beta (1.9) version of their product for months, which I’ve been testing. It has many enhancements not available in the 1.8 version, which has been on the market over the past year. Until Affinity updates Publisher from 1.8 to 1.9, it just isn’t ready to do some of the tasks necessary in newspaper and magazine design.

Here’s the good news: It looks like version 1.9 of Publisher is eminent. With version 1.9, users have almost all the tools they are used to using in InDesign and QuarkXpress, and a few more.

For newspapers and magazine, there are two areas I find Affinity Publisher lacking, compared to InDesign and QuarkXpress:

Having written that, I’m reminded that most designers rarely use the table features in InDesign or QuarkXpress, however, for those of us that do, they’re very important, so these might be deal breakers.

Since my November column, I’ve been quite impressed at the speed with which the programmers at Affinity (Serif Ltd.) have made additions and improvements to the beta application. The PDF workflow works very smoothly now, giving users the ability to let a PDF file “passthrough” without any changes to the original or to open and edit the PDF file in Publisher. Trust me, you will rarely, if ever, want to edit a PDF file from an advertiser, but the ability is there.

Affinity has recently added the ability to merge data from Excel and other databases in Publisher documents. I played with this feature for about two hours and finally figured out how it works. So far, so good.

Issues with paragraph styles, called “Text Styles” in Publisher, have been fixed, as have earlier issues with guidelines. Frankly, as far as I can tell, everything is working as it should.

I’m sure it was tempting for the folks at Affinity (Serif Ltd.) to release version 1.9 sooner. It tells me a lot about the company that they’ve waited until they’ve gotten all these issues fixed before releasing it to the public.

My 900-word limit is quickly approaching, so here are some things you should know:

Have I lost my love for Adobe products? No way. My relationship with Adobe goes back a long way. In the 1990s the then-CEO of Adobe wrote to me, “I’m not sure we’d still be in business without you.” Heck, later this week, I’m leading a webinar for more than 100 newspapers in advanced InDesign.

But my love for the printed word is greater. I won’t be leaving InDesign to switch to Publisher any time soon. But for many newspapers, it might be a way to save hundreds of dollars each month, with no loss in productivity.

My advice hasn’t changed. Go ahead and purchase a copy of Affinity Publisher. Have a designer begin working with it to create ads and report his/her findings. Then, if/when the time is right, make the move to Affinity.

If you do make the move to Publisher, you’ll want to purchase a copy of IDMarkz from markzware.com. IDMarkz will allow you to convert your InDesign documents to Publisher documents with the press of a button.

I have a feeling it won’t be long before a lot of newspapers and magazines will be creating pages and ads using Affinity Publisher, but there’s no rush. Get Publisher, try it out, and see if it’s for you and your staff. In the meantime, don’t get rid of your copies of InDesign and QuarkXpress.