Tariffs are behind us for now. What's next? 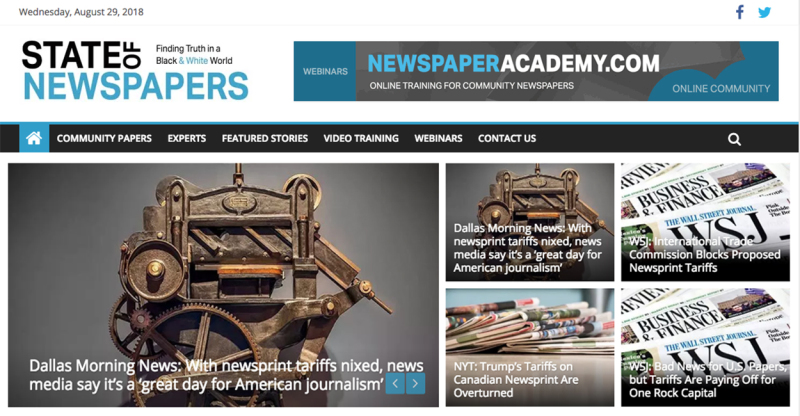 It's been two hours since I received word concerning the news that tariffs aimed at newsprint had been overturned. The first person to write me was Ron White, a retired university journalism chair who now lives in North Carolina.

Within minutes, stories from major news outlets were spread across my "extra wide" computer monitor:

Dallas Morning News: "It's a 'great day for American journalism'"

Some industry friends have noticed I've been unusually quiet about the tariff issue. As I've told them, I had a couple of reasons for keeping my feelings about the tariffs to myself.

First, I figured the tariffs would be overturned. I can't remember an issue that was so universally unpopular in the newspaper industry as the tariffs on Canadian newsprint. With community newspapers circling the wagons, I can't imagine there were many congressional legislators or senators who weren't getting regular calls, texts and emails about the issue.

Second, I didn't want to see the tariff issue used by newspapers as a scapegoat for other somewhat nefarious plans.

I could just hear the wheels spinning at some newspaper group headquarters.

"That's it! We can lay off 10 percent of our workforce and blame it on the tariff!" I could almost hear the joyous laughter from CEOs coast to coast.

"Whoa Nellie! We can cut our print days and blame it on the tariffs!" I came the echos of another joyous executive beam. "We can't help it that paper costs have skyrocketed!"

I wonder how many of those laid-off staffers will get their jobs back today. I wonder how daily papers that cut print days will go back to the way things were a few weeks ago.

No, I don't really wonder. What's done is done.

A reader in New York just wrote to ask if I thought the increase in her newsprint bill would be refunded to her. I told her not to change the balance in her checkbook yet.

I think I enjoyed the email from Chris Vass, public editor at the Chattanooga Times-Free Press, the most. She sent a short message that seemed to sum up the feelings of most newspaper folks, "Yay!!!"

For now, I just want to take, relax, breath in and enjoy the moment. It was only an hour ago that the International Trade Commission found that the imports of Canadian paper do not hurt American producers. The unanimous decision by the commission should cause a lot of journalists to enjoy a brief moment of relief.

After an appropriate period of celebration, let me suggest that we step back and take a look at what we've learned through this experience. What did we learn about the influence we have as community newspapers.

Don't kid yourself. It wasn't the editorials in the big dailies that got the attention of decision makers. It didn't hurt, and I'm glad our daily brethren took up the cause.

I've been convinced since the tariffs were first announced that it would be through grass-root efforts by thousands of community newspapers that the right folks would hear the voice of journalists throughout the land and reverse this decision.

My question is, "Now that we realize we still have significant influence, how are we going to use this knowledge?"

Maybe it should be, "Will we learn anything from this struggle, or will we go back to the way things were a few months ago?"

It's my hope we will learn something.

I'm hoping I hear from fewer newspaper owners who feel like they "have to" sell their newspapers right away. The number one reason I've heard from these owners is "the increased cost of newsprint."

Maybe newspapers run by venture capitalist firms will pull back from the idea of "pursuing efficiencies" (code words for reducing staff and cutting pages).

I don't know about you, but I'm ready for our industry to quit writing fake news about ourselves. Let's just be honest. If things aren't going well, let's hunker down (a Southern term, I think) and figure out why. I work with too many newspapers who are doing well to believe that it can't be done.

For this moment, however, I'm going to take a moment to breath ... and celebrate quietly.

To those community papers and others who spoke out on this issue, please accept my sincere thanks.

The sun came up this morning. The sky did not fall, after all.