You might be losing more than pages with lower page counts 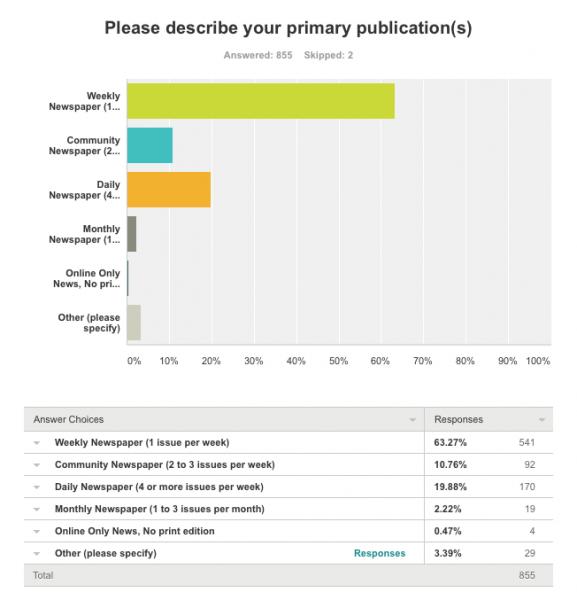 There is a rule of thumb which almost always proves to be true at newspaper conventions: attendance drops drastically on Saturday morning. There are plenty of theories on the subject from "too much fun on Friday night" to "heading home to be with the kids."

Whatever the cause, you can imagine my surprise when I walked into a room in Des Moines, Iowa, two days ago and realized it would be necessary to add chairs. Honestly, I didn't expect many folks to show up for a Saturday morning session where we would primarily be looking at numbers, but show up they did.

The topic was "What's Really Going on in the Newspaper Industry." My plan was to discuss results from my most recent survey, completed only days before the Des Moines conference. It was obvious the attendees really wanted to know my thoughts on that topic.

After completing a major survey, I attempt to discuss one or two findings in each of my subsequent columns for newspaper industry readers until we have covered the most relevant findings. As with previous studies, there is enough information to write books about the state of the industry, but I will stick to the most interesting discoveries.

Perhaps the most thought-provoking discussion in Des Moines revolved around newspaper ownership. Before sharing survey results, I gave the group a little quiz. Their mission was to guess how North American newspaper publishers responded to the survey. Not to answer the questions in the survey as they related to their own newspapers.

I found that most interesting because most of the folks in the room were from independent publications, not part of a larger group. Yet they assume that most of their brethren are from large newspaper groups. And as I discussed in a previous column, independent papers reported better health and more growth than those that are part of a group.

There were several other questions where most publishers guessed their papers were different from most others. When the numbers are broken down, however, we find that ownership plays a bigger role than anything else in determining how newspapers respond. Most independent papers respond very similarly to most questions, as do most small, mid-sized and large group newspapers.

We could argue all day whether newspapers are healthier as a result of having more pages, or whether healthier papers produce more pages because they are in better shape. I would guess that, as in most topics of disagreement, the truth is somewhere in the middle.

That figure is even more amazing when compared to newspapers with decreased page counts over those same years. Of those, only 17 percent report improved health over the same period.

Among the largest group, made up of papers which report the same number of pages as three years ago, 38 percent indicate improved health since 2013.

This discussion could easily turn into a "Which came first, the chicken or the egg?" conversation. I would suggest there are enough responses to persuade me that one of the indicators of newspaper health is page count as compared to previous years.

I'll stop there. If you're fortunate, or perhaps unfortunate, enough to be in one of my audiences in Rochester, New York; Amarillo, Texas; Pittsburgh, Pennsylvania; or Mitchell, South Dakota, over the next few weeks, I'm sure we'll find plenty of time to discuss these surveys in more detail.