BREAKING NEWS! Print is KING for the next 10,000 years, MINIMUM! 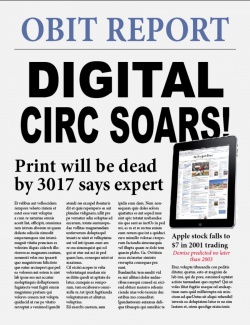 I wonder how many groups are going to get mad at me over this one. Here goes.

The headline surprised me for a couple of reasons. First, News & Tech has been a strong believer in the value of print over recent years, when the temptation for many publications has been to promote the “print is dead” philosophy. News & Tech’s Chuck Moozakis even wrote a column about the value of print in the September/October edition.

As I read the story, based on daily circulation for the 613 newspapers reporting to the Audit Bureau of Circulations for its latest six-month report ending Sept. 30, 2012, I was confused.

But what kept drawing my focus was the headline:

So I looked more closely. Digital circulation sits at 15.3 percent today. A year ago, it was roughly 9.2 percent.

According to the story I was reading, “ABC said digital-only subscriptions are on a sharp incline, with the organization reporting that digital circulation now accounts for more than 15 percent of newspapers’ total circulation. That’s a jump of almost 10 percent over year-ago figures, ABC said.”

The numbers confused me. I couldn’t figure out where the 10 percent increase was. Being the stickler I am about such things, I decided to look for myself.

Still today, I read more headlines in newspapers around the world about how digital circulation is soaring among U.S. newspapers. Wanting to be sure of my facts, I contacted Susan Kantor, ABC’s director of communications. She was very helpful and we looked at the numbers together. Sure enough, I had my facts straight.

So here’s my question. Wouldn’t the headline be more accurate if it were:

Isn’t it funny what we can do with numbers? The truth is that over the most recent six months, print circulation stayed relatively steady. No big gains, no big losses. The percentage of circulation attributed to digital devices rose from 14 to 15 percent, a very slight increase.

My calculator (no, I didn’t really need a calculator for this one) tells me that at this rate, digital circulation will be higher than print circulation in just 17 years.

Just to make sure I hadn’t confused the facts, I contacted David Anderson, professor of mathematics at The University of Tennessee, where I serve on the adjunct faculty in the College of Communication and Information. I’ve never met Dr. Anderson, but I asked if he would look at these numbers with me and see if I was off base. He was quite helpful.

When I shared the numbers with him for the past year, then looked more closely at the differences between the first six months and the last six months, he was surprised. He said he thought print newspapers were almost gone, from what he’d read in the media. I explained that a lot of people think that from the stories they read.

Thus the headline could just as easily read:

Print is king for next millennium

OK. Let’s get something straight. I’m not so naive that I think it will be thousands, or even hundreds, of years before most of us get our news using means other than print. But at the same time, we do a huge disservice to our readers and ourselves when we play with headlines like this.

Here’s the story as I see it.

Was there an increase in digital circulation over the past six months?

Yes, from 14 to 15 percent of total circulation.

Did print take a nosedive over the past six months?

No, print held up just fine.

Did daily newspaper circulation drop over the past six months?

No, overall it held steady. Perhaps this is the news we should be sharing with advertisers and readers.

Do I think News & Tech has given up on print newspapers? No way. Their history tells me N&T is a firm believer in print. I just think it could have been a better headline.