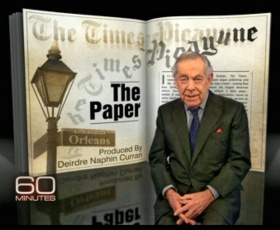 My 13-year-old son received an iPod Touch for Christmas this year. I know my son. Probably as well as I’ve ever known anyone. And I knew, given time, he would lose his expensive gift.

In an effort to soften the blow when the device did turn up missing, I had Zachary create a background screen with the words, “If you find this iPod, please email kevin@kevinslimp.com to let my dad know you have it.”

I had to tell you that story, so you would understand the reference to my son a little further down this column.

Now for story number two. In the late 90s, I left the newspaper world for a few years to be director of communications for the United Methodist Church in my part of the United States. I had a staff that created publications, online content, P.R. material and a newspaper. Some of the most interesting aspects of my job came under the heading of “crisis communication.”

As crisis communication director, I prepared the organization for emergencies we hoped we’d never see. Several thousand professionals made up the clergy and staffs of these congregations and it was my job to be sure they were ready in the event of a “media event.” I was quite adept at getting TV reporters to report just about anything. Newspapers weren’t as quick - you might say “gullible” - to accept everything as the truth, so I generally used television to get information out to the masses.

This meant I would create text that ministers and others were to use if called by a member of the media during a crisis. They were always instructed, if the reporter wanted more information than I had provided, to contact me directly.

Understanding that story will also come in handy as you read further.

So last night I was having dinner with a friend when I got a text that read, “Are you watching 60 Minutes?”

“No,” was my immediate response.

“They’re saying the newspaper industry is dead. I thought you’d want to know.”

Within minutes came an email from Karen Geary of the Paris Post-Intelligencer in West Tennessee. “Did you see 60 Minutes? It’s a story about The Times-Picayune. They’re saying newspapers are dead.”

The evening continued like that with texts, emails and calls arriving from concerned viewers near and far.

The story, of course, was about The Times-Picayne’s move from a daily to a three days a week publication. I was especially interested because some of the folks in the story were the same folks who contacted me back when the shift was announced.

Steve Newhouse declined to be interviewed for the story. That job fell to Jim Amoss, longtime editor of the paper.

Safer’s first question to Amoss seemed simple enough. “Did you agree with the decision to start publishing three days a week?”

I’m listening to this interview for the fourth time as I write. And for the life of me, I still haven’t heard him answer the question. He gave what sounded to me like a “packaged” response, the kind I might have written years ago.

It reminded me so much of my son, when I asked where his iPod was, knowing full well it had been lost. He told me all about the possible places an iPod could be, without coming out and telling me he’d lost it a few days earlier.

I felt for him. I wanted Amoss to tell us what he really thought, one way or the other. All I got from listening to his interview was that the industry was grappling with options. Safer equated what was happening to surgery, where all the limbs are amputated and replaced by artificial limbs.

In an open letter to Advance, the paper’s parent company, several high profile citizens of New Orleans, including many names that you would know, wrote that “The Newhouses are losing the trust of the community.”

David Carr, New York Times reporter, said, “I don’t think they expected the hurricane winds that came against them.”

Yet in a radio interview from a few weeks ago, David Francis, business manager for the NOLA Media Group, of which The Times-Picayune is a part, said that New Orleans is “embracing us again.”

I called Carl Redman, executive editor of The Advocate in Baton Rouge to ask him about the new daily paper in New Orleans created by the Baton Rouge paper. Redman reports that his group was overwhelmed by the response to the new daily. They had hoped for a circulation of 10,000 by February 2013. Instead, more than 10,000 subscribed to the newspaper within a week.

I tried to reach someone at The Times-Picayune, sending emails to the publisher and several managers, but received no response.

Finally, I decided to talk with Rob Curley, deputy editor of the Orange County Register (OCR), whose resume includes more experience in online journalism than anyone I can think of. Rob is a household name and I figured he could give me insight on whatever it is I’m missing related to The Times-Picayune conversion to a non-daily.

Instead we spent most of our conversation talking about his new job in Orange County. OCR is one of the 20 biggest papers in the country.

Rob has left his role as online guru to serve as one of five deputy editors of the paper. He explained that, since July, OCR has increased its newsroom staff room 185 writers and editors to 300.

I could write several columns about the changes at OCR, but I can sense Rob’s excitement when he discussed his work with America’s “largest community newspaper,” a description credited to Ken Brusic, executive editor.

After spending my afternoon interviewing Carl Redman and Rob Curley, I found it difficult to understand why Safer referred to newspapers as “dying.”

I found it even harder to understand after reading a story in News & Tech today that six of eight publicly traded newspaper companies showed increases in their stock prices in 2012. Not small increases, but double-digit increases.

I love talking with folks who are excited about working for their newspapers. I visited with two newspapers in Virginia and Kentucky over the past few weeks to work with their staffs. Both papers are doing well and continue to invest in the future.

It’s no coincidence that papers that invest in the future thrive. And while the Orange County Register may be America’s largest community paper, you can bet that thousands of community papers will continue to serve their communities and surprise Morley Safer at the same time.

My suggestion? Remind your readers that your paper is providing a vital service to the community as it has for years. And, perhaps, take a cue from the folks in Orange County and continue to invest in the future.