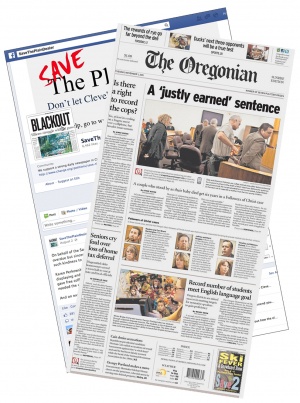 This month’s column is dedicated to my friends in the community newspaper world. So much is going on in our business - and I receive so many messages asking me to write about my thoughts on these events - that I wanted to take one column to explain how I think some of the big “stories” about the newspaper industry particularly effects those of us at smaller papers.

The Newhouse folks, aka Advance Publications, continue to convert their daily newspapers to non-daily distribution. I’ve lost count of the number of Advance papers that have made the move, starting with nine properties in Michigan, then moving through New Orleans, Alabama, Pennsylvania, New York and now, Cleveland.

In July, I took a trip - on my own dime - to meet with media, business and civic leaders in Kalamazoo, Michigan, to hear how the loss of a daily paper had effected their community. In a community meeting hosted by the Home Builders of Southwest Michigan, I listened as one attendee after another spoke up about the negative impact felt after The Kalamazoo Gazette made the now familiar move from daily to non-daily delivery.

On my way to the meeting, I stopped at a supermarket and purchased a copy of the Wednesday edition of the paper. The 20-page edition was filled with one ad, 1/4 page in size. That’s not a misprint. Other than a few classifieds and public notices, there was one ad in the entire newspaper, not including house ads.

There were at least two persons in attendance who owned community newspapers in the area. One of these owned a very healthy free newspaper, while the other owned a paid weekly paper. Of particular interest to me was that both were very disappointed with the changes at the Kalamazoo newspaper, but were taking advantage of increased advertising revenues as a result of the changes. Let’s face it. Advertisers still need to advertise, even if they’ve lost their daily paper.

Also in attendance were broadcast media representatives. It was interesting to learn that their revenue had also increased significantly as a direct result, they felt, of the changes at the daily newspaper.

In addition, local civic and business leaders, as well as others, shared their concern for a community without a “serious” newspaper.

I didn’t plan to write about this. But I’ve received a bunch of emails and other messages asking me to share what I think about the purchase of The Washington Post by Jeff Bezos.

In a nutshell, I’m optimistic and worried. Like Warren Buffett, Jeff Bezos is a huge name that brings instant attention to an industry that can use some positive public relations. It’s concerning that someone with no significant background in newspapers will take control of one of the most recognized newspapers in the world. At the same time, Aaron Kushner and Eric Spitz had not previous newspaper experience, yet they’ve made huge advances at The Orange County Register.

So my hope is that Bezos will follow the examples of Buffett, Kushner and Spitz and invest in ways to improve the newspaper in the long run, rather than seeing it as a cash cow to be dismantled for a quick return. I’m optimistic that could happen. At the same time, I’ve been around this business long enough to recognize that the most successful papers are those that are run by people in their communities. The further the leadership is from the community, the less successful the papers tend to be.

When newspapers get bought up by large corporations with no historical tie to the industry, it’s obviously a concern that they are being purchased simply as a commodity, with no thought to the responsibilities that come with newspaper ownership.

What does this have to do with community newspapers?

There are several ways smaller papers can take advantage of the atmosphere created by unrest in larger papers. First, I’m a firm believer that what hurts our metro papers hurts all of us. We’re all better off if our large, visible newspapers, are healthy and growing. It presents advertisers with a negative view of print advertising in general when our large brethren are making moves that cause the world to see newspapers as a “dying industry.”

But like the publishers I met in Michigan, community papers can benefit by aggressively seeking advertisers in these same areas. Let’s face it, the home builders group in Michigan hosted the meeting in Kalamazoo because they feel like they’ve lost their most precious method of advertising, daily newspapers. While the drop in home delivery can be catastrophic in a metro paper, area community papers can pick up the slack.

It’s also the case that, in communities served by metro papers who have decreased home distribution, readers are looking for solid local news. One of the themes I heard time in again in Kalamazoo was that they reinvented newspaper had cut their news staff to the point that there wasn’t much real news in it. Community papers can provide the news that readers are looking for.

I had a phone conversation with my friend, Ed Henninger this morning. Ed has long been a very respected name in the newspaper world. He mentioned to me that he thought the changes in the Newhouse properties would ultimately be a big boost to community papers, who could pick up the slack in news and advertising.

If I were to wish, I’d wish that other metro papers would invest and improve in ways that the folks in Orange County are finding profitable. But in places where that is not the case, I would suggest that community newspapers can use this opportunity to improve their presence and offer advertisers the resources they are searching for.