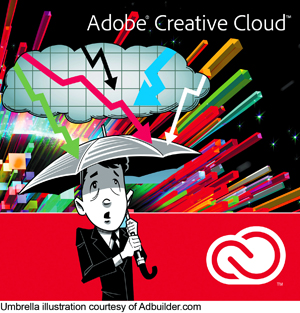 When I was a college student living in Texas, I got used to hearing people say, “Boy, howdy.”

This wasn’t a greeting, as you might think. It was more along the lines of “You’re not kidding!”

It’s struck me as funny that, as I thought about the best way to explain the reaction to Adobe’s Creative Cloud announcement, the first words that came to mind were, “Boy, howdy.”

Did Adobe open a huge can of worms by moving to the Creative Cloud model? Boy, howdy. Did they ever. Is the creative and publishing world up in arms about it? Boy, howdy. Are they ever.

Is there anything we can do about Creative Cloud? Probably not.

For those who have been hiking the Appalachian Trail for the past two months and aren’t familiar with the changes at Adobe, here’s the short version: You no longer buy Adobe software. You lease it. Think of your cable company. For a monthly fee, you have access to hundreds of channels, even though you probably don’t watch more than three or four.

Cable seemed like a good idea when I moved into my place three years ago. I got 200 channels, HBO, high-speed Internet and a phone line for $99 per month. It’s hard to argue with that. What I haven’t been able to figure out is how my cable bill went from $99 per month to over $200 without my noticing it. And I don’t even get HBO anymore.

And that’s the catch about Creative Cloud, isn’t it? Sure, we get InDesign, Photoshop, Illustrator, Flash, Acrobat InCopy and a couple of dozen other apps. But let’s face it, how many of our people use more than two or three Adobe applications?

And that price of $30 per month per user? That sounds like an OK deal. $360 per year for the latest version of Adobe software. But what about next year. That price is only guaranteed for the length of the one-year agreement. And, unless something changes, the $30 per month goes up to $50 for folks who sign up after July 31, 2013. So beginning August 1, that $360 moves up to $600 annually.

Are people upset? Boy, howdy. There are blogs and online communities dedicated to complaining about the changes at Adobe. They’ve recently been compared to Quark, whose corporate attitude in the 1990s led to their quick descent from their lofty perch as king of the creative world.

In 1997, Publish Magazine asked me to write an editorial comparing Adobe to Quark. Not a software comparison, but a comparison of the companies. At the time, it seemed like just about all of Quark’s customers were tired of their corporate “take it or leave it” attitude.

Quark customers left in droves after the release of Adobe InDesign. Over the next few years, the king of the creative world was sitting at the bottom of the heap, looking up at the new king.

I’ve received calls and emails from publishers from New York to California. I even received a call while I waited for a flight in Boston last week from a National Newspaper Association board member. He called, during their meeting, to learn what our alternatives are as an industry. Apparently it was the board’s “hot” topic at that moment. My answer, “Not much.”

At this moment, however, I’m letting my mind play “What if?” The game is played something like this:

• What if Quark got together with Corel and packaged the latest version of QuarkXPress with Corel Paintshop Pro and sold the bundle for $699?

• What if Quark bundled QuarkXPress with GIMP, a free Photoshop “clone” application and made some tweaks so the two applications could work seamlessly together, like InDesign and Photoshop?

The problem with playing “What if?” is that it’s just a game. It looks like none of these scenarios are going to happen. I just got off the phone with Gavin Drake, VP of Marketing at Quark, and it sounds like they’re not planning any bundles or making any plans to take on the Creative Cloud.

And let’s face it. If Quark’s not interested in competing with Adobe on the publishing front, who will?

And, for those of you who are wondering, I did talk to Liz Mitchell, PR Manager at Corel. She was very kind and happy to answer my questions concerning Adobe users looking for alternatives. However, in the end, Corel has products that serve as alternatives for Adobe Illustrator and Photoshop, but their products are primarily Windows-based and there is nothing to compare to InDesign or QuarkXPress.

I’m not worried about the changes with Adobe software. We can always keep producing newspapers and other publications the way we always have. What does worry me is that companies like Adobe and Quark don’t see the traditional publishing world as a market worth concern any longer.

And as logical as it seems, creating an alternative to InDesign just isn’t feasible. I was involved in the K-2 project - what later became InDesign - and it seems like it took seven years or more to develop the original version of the application.

So what’s my advice? There doesn’t seem to be a viable option to Adobe Creative Cloud at the moment. Eventually you will be forced to upgrade equipment and software and, when you do, you’ll probably sign up for Creative Cloud.

In the meantime, read carefully. The price goes up significantly after July 31, 2013. If you are going to upgrade software, do it before then. Otherwise, you’ll spend $240 extra per user over the next year.

Am I a little frustrated that we don’t seem to have other options? Boy, howdy, am I ever. But like everyone else, there doesn’t seem to be much I can do about it at this point.

I’d love to hear your thoughts about the changes at Adobe. Email those to me at kevin@kevinslimp.com.