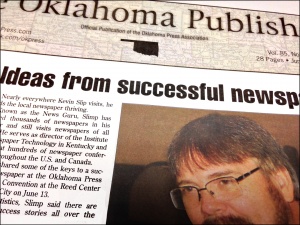 A colleague just walked into my office with a big grin on his face.

“At the risk of making your head grow any bigger, I thought I’d show this to you.”

He was holding a copy of The Oklahoma Publisher, the official publication of the Oklahoma Press Association. On it was a photo of me that filled half the width of the front page. The story was about a speech I gave in Oklahoma City in June related to successful newspapers.

But it was the column on page 2, by OPA President Jeff Mayo, that caught my attention. In it, he mentioned that their convention drew the highest number of attendees and highest number of newspapers in nine years.

The fact that OPA drew a large crowd didn’t surprise me. It reinforced what I’ve seen at other conventions. Rising convention numbers seems to be a trend over the past two years. I just checked with several of the association conventions I’ve attended in 2014 and learned that all who responded had a significant attendance increase over the previous years.