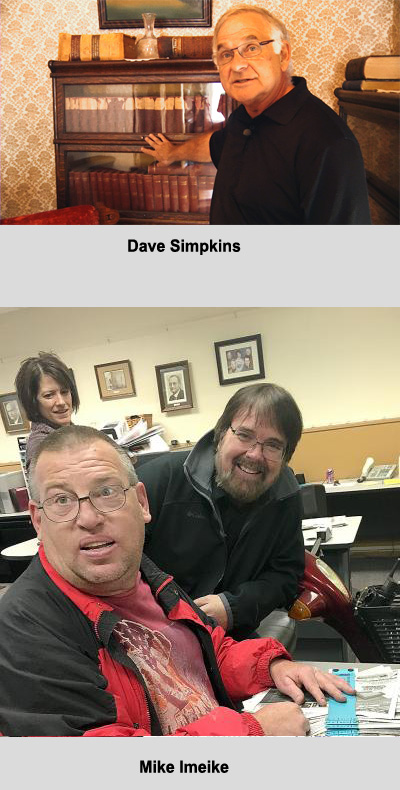 There's a reason I love my work so much. There's a reason that there are folks around the country waiting for me to return their calls while I'm writing this column. They can wait. This is more important.

I love my work for the same reason that many of you do. I've got something important to tell you and it can't wait while I make phone calls.

In my opinion, "Awesome" is the most overused word in the English language. I cringe when I hear it, and as the father of two teenagers, I hear it a lot.

So I got out the dusty thesaurus and found a synonym that would work: phenomenal. That's the best word I know of to describe the trip I just took to Minnesota. Yes, that's right, Minnesota.

I've worked with more than 100 papers in Minnesota this year. I know, that's a lot of papers. And there is something that's very apparent as I crisscross the frozen tundra (OK, tundra might be a stretch) of Minnesota, visiting papers from McGregor to Pipestone to Preston: newspapers in Minnesota are doing really well. That truth was never more apparent to me than in late October, when I visited papers in the central and western areas of the state.

I've got John Stone to thank for the visit. John manages Quinco Press in Lowry, a small town in West-Central Minnesota. I've visited Quinco a few times since 1997, and my official reason for traveling to Lowry in October was to do an afternoon of training for area newspaper staffs, then a day of press tests on Quinco's new press.

Following the afternoon of training on day one, I had the real pleasure of having dinner with John and his wife Mary, along with Reed and Shelly Anfinson, old friends who run weekly papers not too far from Lowry. I had just seen Shelly a week earlier at The Institute of Newspaper Technology in my hometown of Knoxville, Tennessee.

We discussed the plight of the newspaper industry, with more and more newspapers being bought, only to be closed by large corporations. I did as I sometimes do in such situations, realizing I was becoming way too excited about the subject.

I loved it when Reed looked at me from his end of the table and said, "Keep going. You're preaching to the choir here."

Most Minnesota newspapers, it seems, aren't owned by far-away corporations. They're owned and operated right in the towns where they're located, or within a few miles. And unlike newspapers in some areas, most aren't suffering from staggering circulation declines and disappearing profits. The more than 400 newspapers in Minnesota are doing something right, and I'm starting to understand what that is.

On the evening of day two, I found myself in Sauk Centre, Minnesota, a thriving town two hours north of the Twin Cities. Dave Simpkins, recognized nationally for his phenomenal success, had invited me to spend a day with his staff. But first, he invited me, along with a few other folks, to dinner.

As we sat at our table, a young man in an electric cart drove up to our table. Having several friends with cerebral palsy, I immediately knew that was the reason he was in the cart.

Dave introduced me to Mike Imeike and I quickly learned that he is in charge of tearsheeting at the Sauk Centre Herald.

It's difficult for many folks to understand someone with cerebral palsy when they speak, but I had no problem understanding Mike when he quickly volunteered, "Dave called me on the phone ten years ago. He said, 'I've got a job for you. Come down to the paper.'"

Mike did as instructed and has been in charge of tearsheeting in Sauk Centre for ten years. It's obvious the rest of the staff loves working with him and Mike, Dave tells me, is a great employee.

I compare stories like that with the trend of large groups to buy newspapers, cut staffs to bare minimum, then watch their circulation and profits deteriorate.

Dave Simpkins has a good heart. Of that, there is no doubt. But he also knows something about running successful newspapers.

I'm sorry that most folks don't have the luxury of visiting places like Sauk Centre, McGregor and Pipestone. These are places where newspapers are valuable assets to their communities, where writers, editors and designers feel a part of something greater, and where the future continues to look bright.

As Dave Simpkins and I had breakfast at a local cafe in Sauk Centre to begin day three, I noticed the love and respect that was shared between him and everyone we encountered.

When Dave introduced me to a group of six folks and told them I was there to improve their newspaper, one man quickly spoke up, "Don't do anything to mess up our paper. We love it."