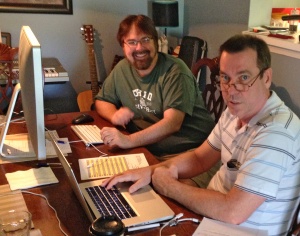 I first met Mike Mathes in 2012 when he invited me to visit the North Woods of Wisconsin to speak during an annual retreat for newspaper publishers. The retreat honored Wisconsin publishers who died during the previous year. Prior to that, I had met his brother, Joe, at several association conventions where we often found ourselves on the same programs.

Mike is president of Delta Publications, a group that includes two free publications, Tempo and Verve, and one paid newspaper, Tri-County News, in Eastern Wisconsin. Having worked with both Mike and Joe in the past, I wasn’t entirely surprised when I got an email from Mike, about assisting with a couple of technical challenges.

The first was simple enough. Like many newspapers, Delta’s publications go through the hands of multiple editors and designers before they go to press. And like in many production offices, fonts were an issue. Even though each of the computers seemingly had the same fonts on each computer, InDesign would pop up the dreaded “Font not loaded” message on a regular basis when a file created on one computer was opened on another.

The second challenge was a bit more interesting. Mike mentioned that producing their publications would be much more efficient if he, along with others who sometimes worked away from the office, could connect to the office network from remote locations. He went a little further than that. Not only did they want to connect to their servers, they wanted to be able to work from home or wherever exactly the same way they did back at the office. This meant if a staff member worked on a desktop at the office, they would have the exact same experience when working from a mobile computer at home.

He had tried, with very limited success (OK, not much success at all) to use tools like LogMeIn and Dropbox to accomplish the task, but those, while good products, don’t allow what Mike and his staff wanted. They didn’t want to take control of a computer at the office - which I do on a daily basis, but not for this purpose - or simply transfer files back and forth. Mike wanted the freedom to be able to work at home or on the road with no limitations.

I could tell this was important to Mike, and the more I thought about it, the more it seemed like something that could be accomplished remotely, without making a trip to Wisconsin.

I recruited my friend, John McNair, an IT guru at The University of Tennessee, and three weeks later, we met at my home and began the work of creating a remote office for Mike and his staff. Fortunately, Delta has a very competent staff person, Klaudia Schnell, who worked with us from the Delta offices in Wisconsin while we worked in Tennessee.

Creating the remote office was basically a four-step process. First, we used LogMeIn to get access into each of the computers and the server at the Delta offices in Wisconsin. While inside the server, we noted information that would be needed to create a DNS entry which would allow Mike and others to access the server remotely.

Next, we used a service to create a DNS entry for the Mac Mini server from Apple. DNS is the component of the Internet which converts human-readable domain names (kevinslimp.com) into computer-readable IP addresses (66.18.125.171). It does this according to DNS zone files that reside on the server and tie a domain name to an IP address.

Once we had a DNS, John took control of the router at Delta and opened up a port (Geek note: AFP uses port 548), which allows a remote user to “forward” from the router to the server if they have the necessary credentials. For whatever reason, we kept entering that number wrong for port forwarding and finally, on the fourth try, entered the magic number and - BOOM - we were connected.

John and I literally “high-fived” on the spot. The four hours had been a complete success.

After a break for lunch, I met with Klaudia online and we discussed a couple of possibilities for fixing the font issues. She had already been experimenting with moving entire font lists from computer to computer to eliminate the issue. While we were together, we looked at a quicker approach, which involves moving particular fonts to the InDesign Fonts folder, which also worked. We took turns, her in the Delta office and me at my home on LogMeIn, moving files back and forth until we were both confident that the process would work. Klaudia volunteered to continue that process after we finished our conversation.

I heard from Mike this morning and copied this excerpt from his email to me:

“As a follow up to last week’s work, I am producing my Tri-County News layouts this morning from home, accessing our server with ease from the remote location. You have done an awesome job! Thanks to you and John.

I will also confirm that we have the font issue solved! Thanks, Klaudia.

If I didn’t love my co-workers so much, I might never have to report to the office again!”

At first, I didn’t plan to write about the work with the Delta group. But after more thought, I realized that many of the folks who read this column are of the small, community breed of newspapers who often think such technological advances are beyond their scope or budget.

There seemed to be around 15 to 20 folks involved in the newspaper production at Delta. I’ve worked with papers as small as two staff persons, including the publisher, who felt chained to their desks because they needed to be there late at night, getting stories written and pages designed. By taking on this project - which was completed from start to finish in one day, without the expense of flying a consultant in - Mike’s group now has that ability.