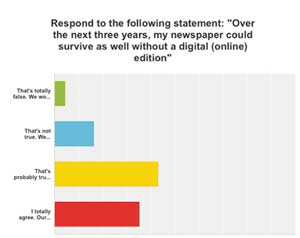 I probably start my workday about the same as most of my readers, checking email. Somewhere around two hours of each day is spent helping people solve their problems. It’s not what I do for a living. It’s what I do because these are my colleagues, even though I might not know them personally and I want to help.

Sometimes it’s a simple question. Darren, in Tennessee, wrote to ask my advice concerning proofs sent to advertisers. Bob, also from Tennessee, had an InDesign file that had become corrupt. That took a little longer.

Barbara, with an ad agency, was having problems with files she was preparing for a newspaper group. Thankfully, I teach a lot of Photoshop to newspaper groups, so I knew how to create an action and use a batch process to cut the time it took to fix her problem from several hours to 15 minutes.

Katie, in Minnesota, is having problems with the color in her photos. A quick look at her color settings clued us in on the problem. I think she should get better results in her next issue.

A newspaper association down south was having issues with a PDF it received from an ad agency. Fortunately, it seems like I’ve run into a few of those before. I asked them to email the file to me, which I opened in Photoshop (at a super high resolution), fixed and sent back.

I’m thankful when problems are easy to fix. They’re not all so quick. Like the press association up north that had technical problems with its contest judging. I eventually spent several hours helping with that one. Or last year, there was a press association in the Rockies that needed an entire awards presentation created at the last minute. I stayed up most of the night working on that one. I don’t receive a penny for these things. Like most of my readers, I care about our industry and try to do my share to help when there’s a problem or issue that needs to be worked out.

Don’t think it’s a one-way street. Newspapers and associations help me on a regular basis. Many times, I’ve contacted a colleague at a newspaper association and gotten help getting publishers to respond to a survey or spreading the word that I was coming to their area. Just yesterday, Kelli, with the North Dakota Newspaper Association, emailed to ask if she could get information to promote the upcoming session of a program I direct each fall in my hometown.

The primary reason I continue to collect data and survey newspaper managers is to help my newspaper colleagues. Several times, over the last few weeks, I’ve received requests for advice from publishers who, after looking over data from a recent survey, found the answer they were looking for.

For instance, my most recent survey - just completed last month - indicates about one-third of weekly newspapers saw an increase in advertising revenue in 2014. That means that many of these papers are increasing staff size, which is also indicated in the survey. Interestingly, most weekly newspapers say it is difficult to find qualified applicants for positions. The most difficult job to fill is a reporter.

Digging further into the survey, I found that wages weren’t the primary reason for the difficulty in finding qualified employees at weekly papers. Fifty-nine percent of publishers responded that it was a population issue. Weekly papers are often located in small communities where qualified workers just don’t live.

Compare that to daily papers, whose responses indicate have even more difficulty finding qualified employees. Eighty-six percent of dailies responded that they found it hard to find the right folks to fill positions.

However, unlike weekly papers that have, for the most part, retained or increased staff size, the majority of dailies (65 percent) have cut the number of staff positions over the past three years.

Are you having trouble finding newsprint? Well, if you are, you might be the only one. Even though “experts” were predicting a newsprint shortage a few years back, 100 percent of respondents answered that they have no problem finding newsprint. Speaking of differences between weeklies and dailies, 79 percent of weeklies say they could survive just as well without a digital presence over the next three years. Only 44 percent of daily newspaper publishers feel that way.

There’s no doubt that non-daily newspapers are doing better, overall, than their daily brethren. Increased ad sales, more stable circulation and other positive signs dominate the surveys completed by weekly publishers. Daily numbers seem to be less favorable across the board.

What is the most obvious revelations from this latest survey? Weekly newspapers are doing something right. Their advertising sales are steady or up for most papers and readership remains steady.

Daily newspapers are losing advertisers and readers (I’ll look into that further in a future column) and are searching for new forms of revenue. That’s a good indicator of the reason for increased dependency on digital revenue at daily papers.

Where do I see things from my desk? The number of requests I’m getting from newspapers for training and advising is more than triple what it has been any of the last four years. In most cases, it’s because publishers are investing in increased quality in their publications. And that tells me that good things are happening in a lot of places.