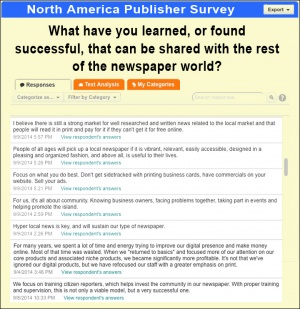 Wow! Today has been one of those days. You’re in the business. You know what I’m talking about.

I planned to start on this column four hours ago, but the phone started ringing. Karen, who emailed late last night, needed my help to get an ad to print correctly in her paper. How could I not take care of that first thing? Jim called from another state to get my advice about a publisher’s job he’s been offered. Ed Henninger, who never refuses to help when I call, called to get some technical advice.

Add to that staying up late last night to help a group of newspapers in another area get the remote access to their server working and, well, you get the idea.

You know the drill. We work in a deadline-driven business. We get it done. No matter how busy we are or what is already on our plates, we get it done.

I heard from a university professor yesterday who had promised to help with a project I was working on. He was several weeks late, so I wrote to ask him how his part was going. He apologized and explained that he hadn’t had time to keep his promise because he had to prepare for a talk next week. Next week. Geesh.

I’ve thought about that as I’ve looked over the results of my recent survey of North American publishers. These publishers are people who get things done. It’s no wonder that most of the newspapers in North American plan to have a bright future. We’re used to making the impossible happen every day.

Today, I’m looking more closely at the survey results. In all, 615 publishers responded to the survey, covering every area of the United States and Canada.

I’m also reading over the comments from a few folks who have been helping me assess the results. Tim Bingaman, CEO at Circulation Verification Council, wrote that he found the results “fascinating.”

Bingaman wrote, “From the comments I read, I am encouraged that so many are focusing on content, customer service and connecting with their communities and advertisers. I certainly agree that there should be a ban on ‘print is dying’ stories from all sides. Baffling why they would write those things about themselves. My first boss once told me that ‘The appearance of momentum is often better than momentum itself.’ In the early days I certainly think that message helped CVC survive. I also believe it’s what the print industry needs today.”

Dick Colvin, Executive Director of Midwest Free Community Papers, seems to agree with Tim when he made a created a list of “Overall best strategies,” after looking over the results of the survey. Number one on his list: “Continue to fight the ‘Print is dead’ mantra. It is not even sick!”

Dr. Walter Fain, psychologist, is used to studying statistics in his work. He wrote a detailed synopsis of his thoughts concerning the survey. Dr. Fain wrote, “Newspapers bread and butter used to be to put out a paper of interest to people for a subscription fee and by selling advertising. The printed paper is still their bread a butter.”

David Bordewyk, executive director of South Dakota Newspaper Association, mentioned that he found several findings quite interesting. “If there is one key take-away for me,” wrote Bordewyk, “it is that local, community-minded and based newspaper publishers realize that it’s not about the delivery technology or platform, it’s about the content and news. The content is most important and community newspaper publishers understand that as well as anyone in the industry.”

Dr. Fain sounded like a newspaper pro when he wrote, “I agree with some of the feedback on the survey that newspapers are most effective when they are locally owned and have active involvement with the community. National news can be found online through Google, Bing, MSNBC, The Washington Post and 1,000 other online sources. Local ownership/management, involvement and reporting is something the national sources can’t provide.”

Bingaman, who spends a good deal of time studying newspaper revenue added, “I am floored by the similarity of response from free & paid papers on total digital revenue. This certainly lends a lot of weight to the message that publications must embrace digital, but print is where the money is and is here to stay.”

Dr. Fain noted that newspapers might not be alone in some of their challenges: “Some newspaper folks are weary of having to continually improve the product with fewer people. They are tired of advertisers wanting more and better ads for less and less money. This is a challenge for newspapers, but today I find those same issues in many industries and services, including schools, hospitals, government, manufacturing, retail, service and others.”

Everyone involved in this study notes the optimism prevalent among newspaper publishers. Even so, there are marked differences between papers that are primarily run locally and those who receive more direction from their corporate leadership. We’ll look at this and other issues in future columns.

Now, back to setting up that remote access system.